Come Holy Spirit Renew the Face of the Earth

Hope is one of the three theological virtues – the others being faith and love.  A theological virtue is so named because its object is God Himself.  Hope is so important because throughout history it has helped people overcome their difficulties – sometimes seemingly insuperable ones – keeping them from despair and cynicism. Both the Church and the World have an absolute need of hope.

We can be joyful that the Church, with Pope Francis at the helm, seems to have been given new hope. The World however, despite the huge scientific and technological advances, does not appear to be filled with hope!  Those who belong to Church are of course in the world, and the Church is surely moving forward in a new direction, with people coming to a truer knowledge of God and how to relate to Him and to their neighbours. God’s Kingdom resides in the Church though our lack of faith, hope and love frequently prevent that Kingdom breaking through the structures to reveal a way ahead.  People are the greatest resource of the Church, indeed they are the Church, and when, under the grace of the Holy Spirit, people grow and develop to become more fully human, hope will spread in the world. 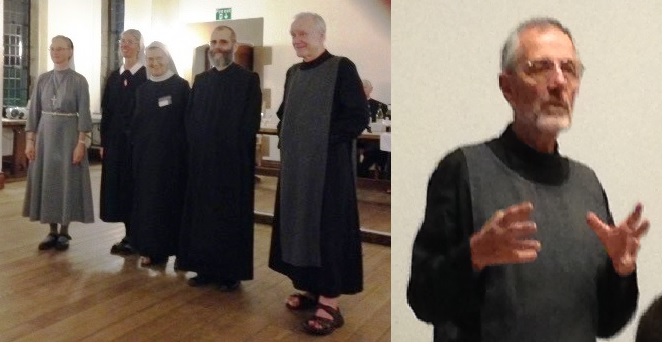 Hope as a spiritual reality comes from the Holy Spirit and since the Resurrection and Pentecost we live in the age of the Holy Spirit. There are many signs of the Spirit of God marking the hearts and minds of the modern world yet our preoccupations and troubles often prevent the Spirit from penetrating our hearts. But penetrate they did for me on different occasions this year, and the Spirit brings joy.

Most of the group outside York Minister on Saturday 22 August.

Before going any further let me emphasise that what follows should not let any reader think that I am not very glad to be Catholic. However I am sure that the future of the Church is in unity with others, and not in our sad divisions. Furthermore it is my conviction after knowing so many from other Christian denominations, and from other religions, that we all have a lot to learn from each other.

The most recent occasion happened between 20-25 August in Mirfield near Huddersfield at the Anglican religious community of the Resurrection.

This was the 19th meeting of CIR, the Congress (or Conference) of Interconfessional Religious. It was in an act of faith and love that I attended, responding to an invitation arising from the year of and for consecrated life. The CIR was founded in 1977 by Spanish priest Father Martin da Zabala. It is designed to bring together religious from different ecclesial traditions to discover and celebrate what they have in common as a way forward towards unity. Members of the CIR meet every two years in a monastic / or Religious community setting, to pray together, eat together and talk together.

All the Benedictines present, (Anglican, Catholic and Protestant), the Dominicans  and the Franciscans (Anglican and Catholic)

Each had their own personal story. Mine concerned an Italian Cappuchin priest, Paolo Cocco, who I know well through the Focolare movement and who is heavily involved in ecumenism, and in particular with studying the current official Catholic – Methodist dialogue. We had both been invited and we received the gifts the Holy Spirit wanted us to have. 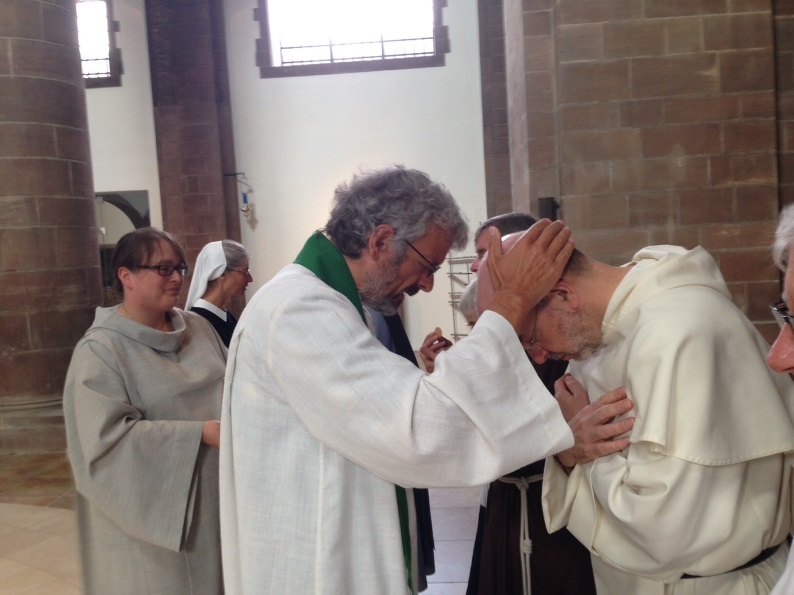 The Reverend Christian Hauter of the Christustragerbruderschaft (with brothers in Afghanistan) giving a blessing to an English Catholic Dominican at the Protestant celebration of the Eucharist.

Firstly, I discovered something already well-known in CIR, that the Religious Life lived by men and women in different Churches seems to transcend the divisions between those Churches. We just feel like brothers and sisters, yes with many differences, but common prayer at the conference, sharing about topics with regard to the life of the Church and Religious Life, and just being together was itself a unifying experience. It is true that there were not many from the British Isles present from Catholic Religious Orders, although there were more this year than previously. Each group has been influenced by elements in Religious Life that come often from the cradle of experience in the Catholic Church; but also vice-versa. For instance the Anglican community of the Resurrection is looking hard at the Benedictine tradition to discover the best way forward for them. The Franciscans of all confessions look to St. Francis whose followers are principally in the Catholic Church. A group of German or Swiss Protestant religious also looked to the Benedictine Abbey of Einsiedeln in Switzerland for spiritual guidance. Our own English Benedictine Congregation recently used the Anglican Abbot of Mucknell Abbey in Worcestershire to help facilitate a pre-meeting for this year’s extraordinary General Chapter. 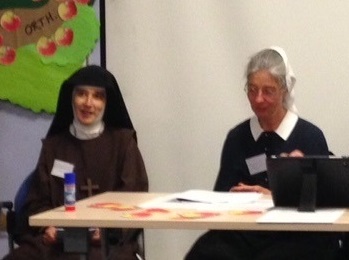 Secondly, I discovered that going on pilgrimage to a holy place (the group went to York on Saturday 22 August) was itself a great opportunity to grow with each other. We made a pilgrimage to the Bar Convent and celebrated there a Catholic Eucharist. We also heard the long and noble story of Mary Ward and her contribution in the field of education, especially of women in the seventeenth century. But also we heard of the long persecution of Catholics from the time of Henry VIII and the break with Rome to the Titus Oates plot in 1679. It was an unknown story for many of the Religious who do not know the history of the British Isles. We also visited York Minster and prayed together for unity in that wonderful building. Some people wanted to see the shrine to Saint Margaret Clitherow who was executed for her harbouring Catholic priests on 25 March 1586.

CIR meets every two years, and in 2013 the meeting had been in Poland at the Benedictine Monastery of Tyniec. Then the pilgrimage was to Auschwitz – Birkenau, the biggest concentration camp in the 2nd World War, where many were martyred for their faith: Jewish, Catholic, Protestant and so many more. One of the participants was a member of a family who had suffered in the holocaust, (22 of her Jewish Hungarian relations having been killed in Auschwitz) – and another had a relative from Germany who had been a commandant in two different concentration camps, though not in Poland. Both these second generation descendants were present in 2013 and 2015 and we heard their extraordinary story of friendship and the laying of ghosts. It was deeply moving to hear them recount their stories with great emotion. These two descendants of families on opposite sides of the fence, so to speak, are both now in Religious Life and have become close friends. Such is the power of the Holy Spirit and the infused virtue of hope.

Sister Sylvia dancing with joy before the Blessed Sacrament while in the background Sister Judith accompanied her beautifully on the violin on the last evening of the conference.

There were many other extraordinary stories. One sister came from Lebanon; she was Arabic speaking and of the Maronite Church (united with the Catholic Church) and spoke powerfully about the situation of the Church in the Middle East, winning everyone’s heart and mind. Another was a German Protestant Pastor whose order consists of 28 brothers. They have been present in Afghanistan for the past 40 years witnessing to the gospel and with no possibility of converts. 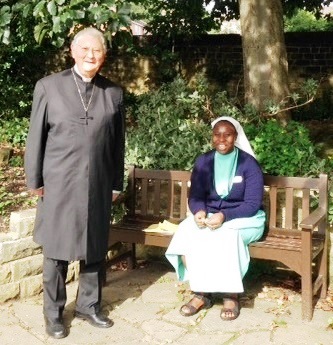 Another was a Presbyterian nun who was the Prioress of a flourishing convent in an English –speaking area of Cameroon. She was young and dynamic and gave an outline of life in their convent. 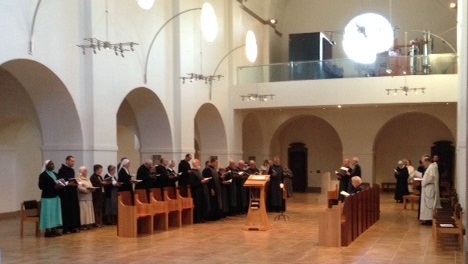 Daily Prayer with the Mirfield Community of the Resurrection took place three times a day.

The common prayer at the conference was also a great bonus and we joined in the Divine Office of the Community of the Resurrection. This prayer was joyful and unifying and needed to be experienced to be truly understood.

In those days I had a glimpse of the Kingdom of God in the Church of the future, in which divisions belong to the past and unity to the present and future. Even if that unity is partial, and may indeed always be so, it will always be growing till the end of time.

Each one of us can contribute to that growth by asking the Holy Spirit to inspire us with the gift of hope and the courage to act in the circumstances of our lives to help bring about the Kingdom.

It is surely significant that Pope Benedict’s second encyclical (Spe Salvi – In hope we are saved) – is devoted to the virtue of hope. He says that Christian hope is transformative because it offers assurance “that life will not end in emptiness”.  He says “Jesus brought an encounter with the living God and thus an encounter with a hope stronger than the sufferings of slavery, a hope which transformed life and the world from within”.  It is easy to become downhearted in the light of so much suffering in the world, but hope reminds us that at death we will experience the blissful fulfilment of life. This joyful expectation should surely fill us with the will and energy to love God and our neighbours!

This site uses Akismet to reduce spam. Learn how your comment data is processed.

COME HOLY SPIRIT! – ULTIMATE QUESTIONS “Everyone who knocks will have the door opened.” Luke…

A friend of mine is a deacon in the Catholic Church in Maidstone, Kent. He…

It no longer seems rational to assume that humanity, encountering an existential threat, will behave…

A Few Steps from Paradise “God wants to love us and to give Himself. He…